WARNING: This post talks about douches and tampons so if that sort of stuff makes you faint, please look away now.

Laugh or cry. You decide. But a few posts ago, I promised to take on douche ads. Then I thought, why stop at douches? Let’s take on feminine hygiene ads from around the world that are more than enough to make any XX, or any XY, cringe. (Nothing like sitting on the couch next to your uncle when one of these beauties pops on screen or winks at you from a magazine on the coffee table.)

First, let’s get past the obvious: blue liquid, waterfalls, meadows, dancing flowers, etc. One of my college roommates had a favorite saying she’d use to describe how she felt after a big night: “I feel like a mud puddle on a dirt road in the rain.” (If I remember correctly, the commercial actually said: “I feel like a country lane after a spring shower.”)  Neither sounds appealing. Guess that’s why it was her code phrase for “I may throw up at any second.”

Speaking of throwing up, how about this little French number? Have you ever seen a fish on a line…down THERE?  Is it fake? Almost certainly. But it’s so bad, how could I resist? I also came across a creepily clever Tampax® ad online showing a woman snorkeling, surrounded by sharks. Death by period.

Of course, Tampax had the much-awarded Zack16, the story of a guy and his sudden need for Tampax products, but that never went mainstream. And I hate to point fingers, but it really reminded me of an old National Lampoon story I read in my early days called “My Vagina.” They also did a hilarious “My Penis” story too, still ripe for inspiration kick starting. I did love Tampax’s “white” campaign from several years ago. That white strawberry stopped me in my tracks.

My favorite? Hands down the fake endorsement spot from Talladega Nights. Ricky Bobby (Will Ferrell) in full racer gear, tells us that  “when you work on your mysterious lady parts stuff, you should have the right tools, too. That’s why you should use Maypax, the official tampon of Nascar.” Comfortably awkward. Nice. 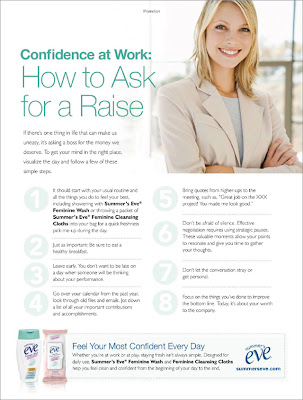 My least favorite? An ad that looks like it ran in 1961. But yes, it ran in 2010. Summer's Eve®, in a misguided attempt to give us confidence, supplied the world with a "How to ask for a raise" advertorial.

Come on, every “sleep your way to the top” and “judge me by my vagina” innuendo is baked right in. But even more horrifying to me was the idea that I was stupid enough to need a list like that in the first place. I actually thought at first that maybe someone had accidentally placed a fake ad, like in “Crazy People.” Guess not.

I can’t remember a time when I didn’t notice, with fear and trepidation, feminine hygiene ads. Through the eyes of a preschooler, I can still see the gymnast Kathy Rigby wearing a white leotard on the balance beam as she extolled the virtues of maxi pads over tight crotch shots . I think that one was from the days when they put marbles in soup, too. No way that lady was wearing a Kleenex® box-sized thing in her pants.

Okay, enough poking. I do have to give folks credit who keep trying. Especially those who try to do something different. Feminine hygiene has to be harder than just about anything else out there. Damned if you do, damned if you don’t. I admire Kotex®’s recent strategic approach and appreciate the packaging every time I have to pick up, you know. Sleek black versus flowers and meadows are much appreciated in the shopping cart.

Still, I’m sure we can do better. A great opportunity exists to create a smart, funny, insightful campaign for feminine hygiene products. If Bridesmaids can happen, so can this. Come on XX’s, we can do this. Perhaps, as my hilarious XX co-worker in New York suggested, we package a box-set of vaginal goods in a 12-pack of beer type box. She suggested we call it Code Red, and just us girls know what’s inside.

Thanks for reading. And I know, picking on feminine hygiene ads is a bit like shooting fish in a barrel. Just ask the French.
Posted by The XX Factor at 12:50 PM

The XX Factor
I'm an advertising creative director. Believe it or not, I'm female.